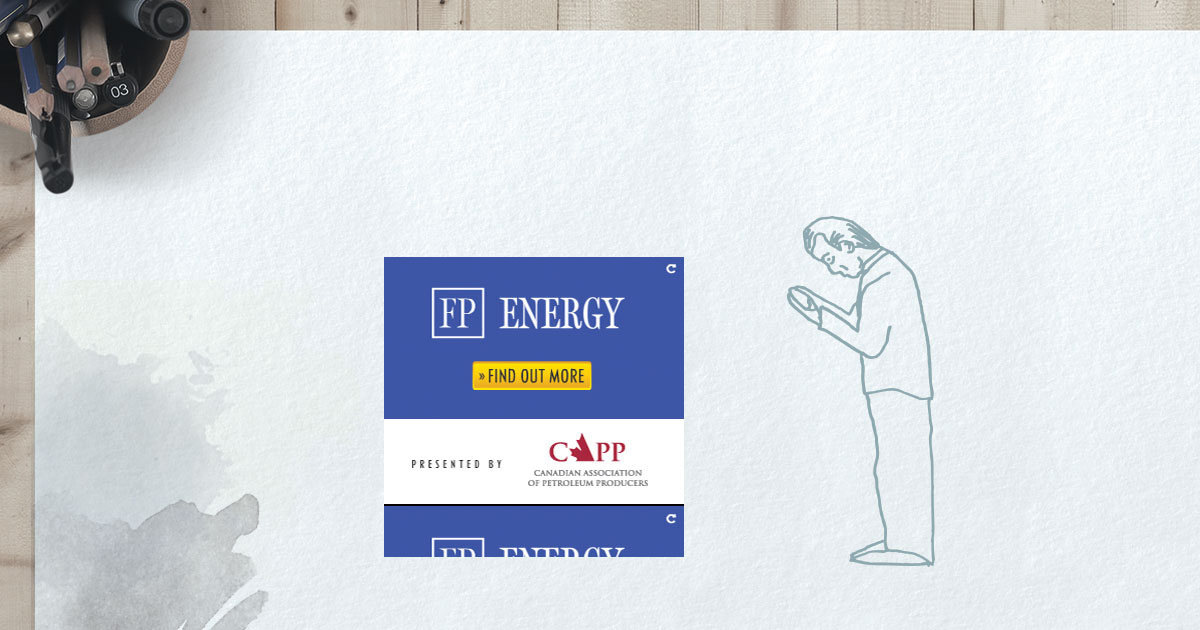 This is my third exploration of racism in the writings of Andrew Coyne. Today’s argument will focus on the  discourse of denial. I should mention that Coyne wrote three articles in January about Aboriginal people, but those articles appeared in several publications including the National Post, the Calgary Herald, Canada.com and the Montreal Gazette.

The Pew Research Centre for Excellence in Journalism has a good resource on the principles of journalism. In it, they state the necessity of context in good journalism. I mention this because an important part of the context of modern state relations with Aboriginal people in Canada is racism. This is well established by the United Nations, by Canada’s own judicial reviews, various commissions [PDF], and government publications. Canadian academics have written a number of well received scholarly texts on racism and especially institutionalized racism in Canada.

Just do a Google Scholar search for racism in Canada regarding Indigenous people. You’ll get thousands of hits.

John Miller is a professor of journalism at Ryerson University. He made a submission to the Ipperwash commission regarding the role of media. He noted that a common frame that journalists adopt is a discourse of denial [PDF]:

The principal assumption is that racism simply does not exist in a democratic society. There is a refusal to accept the reality of racism, despite the evidence of racial prejudice and discrimination in the lives and on the life chances of people of colour. The assumption is that because Canada is a society that upholds the ideals of a liberal democracy, it cannot possibly be racist. When racism is shown to exist, it tends to be identified as an isolated phenomenon relating to a limited number of social deviants, economic instability, or the consequence of “undemocratic” traditions that are disappearing from the Canadian scene. This discourse resists the notion that racism is systemic and inherently embedded in our cultural values and our democratic institutions.

But I am saying that it is. It’s racism. And I’m not alone. It turns out that Yasmin Jiwani, professor of communications studies at Concordia University, wrote an entire book called Discourses of Denial. Her entire second chapter is devoted to media. In it she reflects on a variety of ways that the violence of racism is made invisible in Canadian media. One way this happens is through a normalization of the “inevitable” reality of racism. Another way this happens is by relegating racism to individual ignorance or pathology. Relevant to my argument, however, is Jiwani’s claim that narratives that downplay the frequency and impact of racism are commonplace. Downplaying the existence and importance of racism is a central way that white supremacy remains intact.

The reason for this is that best way to challenge and eradicate racism is to search it out, to name it, to say it’s real and to confront it. The best way to defend and protect racism and racist power structures is to claim that they do not exist. It’s a sound strategy. You cannot find what “does not exist”. I’ll give you an example.

I just did a site search for the term ‘race hustler’ (and other related forms like ‘race hustling,’ etc.) on a well know white supremacist website, stormfront.org. You can do this by using the Google site search function (site:stormfront.org “race hustler”) but I don’t recommend that you actually go to their site. It’s really full of hate. When I did the search, I got hundreds of hits. There are hundreds of Google indexed pages found on the Stormfront website with the term ‘race hustler’ or something close. That’s because the white supremacists at stormfront.org make a habit of ridiculing and shutting down any person who brings up racism by accusing them of being a race-hustler. It’s an accusation of dishonesty and it’s an accusation of “pulling the race card,” of being manipulative and even of being racist – as in “reverse racist.”

See, even though the notion of reverse racism is a deeply deeply misguided concept, it’s common for white folks, like Coyne, to accuse those who are interested in anti-racist practices of being reverse racists. It’s an effective strategy of shutting down and derailing real allegations of racism.

For example, when Psychology Today published an article demonstrating that “colour blind” policy making is a variety of racism, members of stormfront.org called them race hustlers. When courts recognized affirmative action as a legitimate way to combat racism, members at stormfront.org accused the justices of being race hustlers and reverse racists.

Similarly, this research [PDF], by Teun A. van Dijk from the University of Amsterdam, showed that even the “most blatantly racist discourse” in their data “routinely features denials or at least mitigations of racism.” More than that, they “found that precisely the more racist discourse tends to have disclaimers and other denials.” Most importantly for my argument, the strongest form of denial is reversal, like we see when folks accuse others of race hustling.

Take, for another example, the article that Harvard Business School published, recommending that human resource teams stop trying to implement colorblind practices because they result in more entrenched racism in hiring practices. An effective way of denying what Harvard Business School is saying, would be to accuse them of caring too much about race, race hustling, or being reverse racists. And similarly, When Aaron Wherry wrote a piece for Maclean’s and mentioned that Jack Layton was calling for, among other things, “a full inquiry into the 520 missing or murdered Aboriginal women,” Maclean’s readers accused Jack Layton of race hustling:

Oh great. Indians hate us enough as it is and already, thanks to the media and Liberals/NDP, think we committed genocide against them, now Jack wants to take race hustling to a new level. The Indian on other crime rate in Canada is orders of magnitude higher than the reverse. This proposed inquiry would float the fantasy and give the false impression that Indians are largely victims of crime, rather than deal with the reality that is extremely high levels of crime perpetrated by Indians against non-Indians. For example, while Indians make up only 11% of Saskatchewan residents, they make up over 80% of incarcerated inmates, and that’s with “two-tiered” sentencing guidelines by judges which divert Indians from prison sentences, keep in mind. From a gender perspective, men are still far more likely to be victims of homicide and violent crime than women, contrary to the impression Jack Layton wants to give you. So here’s my suggestion: a Royal Commission on the Systemic Use Of Violence And Crime By Indians To Terrorize Non-Indian males In Canada. If Layton wants to race and gender hustle I say we up the ante and do this. – Toporious Tony, Maclean’s

There’s no question that in Andrew Coyne’s January articles he was expressing strong opinions about Aboriginal people. He developed a theory of fundamentalist movement with a traditional agenda within Aboriginal people. He told us that the failures within Idle No More could explain the problems, the chronic poverty, of Aboriginal people in Canada. Coyne explained that the traditional agenda was a movement of extremists, that Aboriginal leaders lacked accountability and competence, and the fundamentalists are “Divinely certain of the righteousness of their cause and undeterred by such niceties as the rule of law…”. If you’re unsure about any of this, see my other articles in this series.

In all six instances Coyne belittles or derides a claim of racism or genocide. Never does Coyne acknowledge, explain or elaborate, any instances or contexts of racism that he considers legitimate. In #1, Coyne accuses Aboriginal people of extending their own suffering, in part, because they “falsely” accuse others of racism. He is making the same move in the rest of the instances. He even accuses Chief Spence of race hustling.

Note especially the tone of derision. It’s as though he is rejecting any interest in even discussing racism. By turning the issues of genocide and assimilation into sarcasm and comedy, he has reversed the accusations of racism. He is not simply ignoring the context of racism, he is denying racism and attacking those that are trying to name and resist it.1

It is worth noting that this pattern of sarcasm and denial is also evident in Andrew Coyne’s Twitter feed as well. He uses sarcasm, derisive jokes, snark, direct denial, more sarcasm.

I’ve storified some of the tweets that reveal Coyne’s preoccupation with, and his denial/dismissal of racism. I’ve also storified a stream of Coyne’s tweets about Idle No More, Chief Spence and the AFN.

December 9, 2016
There is a kind of journalist that pretends their work is beyond criticism. It’s an art form. Here’s a rough taxonomy of techniques..
Read more

Understanding privilege through the lens of Bayesian probability

February 23, 2013
This is my third exploration of racism in the writings of Andrew Coyne, while writing for Postmedia News. Today’s argument will focus on the …
Read more

February 9, 2013
This is my second exploration of racism in the writings of Andrew Coyne with Postmedia News. This argument will refer to three articles written by …
Read more

January 24, 2013
This is my first argument toward the conclusion that journalist Andrew Coyne made claims that were racist. The remarks by Coyne that I will focus …
Read more

January 20, 2013
A little while ago I posted a review of several journalists’ positions on the Idle No Moremovement. With the exception of Ibbitson, all of the …
Read more

Dinosaur journalists and Idle No More

January 8, 2013
I challenge white journalists to tell us how much they think they know about about the history and relationship between settlers and Indigenous people. Judging …
Read more

In which I talk to Dean, an illustrator, and the creator of Today in Three Panels, and we discuss the thin membrane between private and public moments…

I was recently asked on Twitter what the difference is between Santa Claus and the orbital model of the atom. It was asked in a way, that suggested there was no difference, so I thought it must be humour. But now I think it wasn’t.

It is entirely possible for the meanings we create to be beyond our intent and within our responsibility. I’ve said  this before, here. You have to read down a ways to get to it, and it’s so fascinating, that I thought I would repeat it. In the wild of human to human interactions, more meaning…

It’s two thousand years since the birth of Christ; the zero year. I think it’s time to free ourselves from the Christian calendar…

This is my first argument toward the conclusion that journalist Andrew Coyne made claims that were racist. The remarks by Coyne that I will focus on for today’s argument were…